Written by Kyle Nasagawa
Edited by Kaitlin Lemke
From adhesives designed for DIY projects to niche applications, each glue is inherently specific in its functionality. School glue offers a safe means of attaching porous materials. Cyanoacrylates–super glues–tightly bind most substrates with rigid surfaces in a robust manner. Wood glues are effective for binding wood in dry environments. While a seemingly ideal impossibility, a safe adhesive that functions reliably for all household surfaces–an adhesive panacea–without damaging surfaces would obviate the dilemma of needing to toil with different glues.

Applying the concept of an adhesive panacea to medicine yields a method of assembling complex molecular structures for rapid prototyping–providing tools to better understand biological processes and develop effective therapeutics. For pioneering these endeavors with the development of click chemistry and bioorthogonal chemistry, Carolyn Bertozzi of Stanford, Morten Meldal of the University of Copenhagen, and Barry Sharpless of the Scripps Research Institute received the 2022 Nobel Prize in Chemistry (The Nobel Prize in Chemistry 2022 2022).

Sharpless first coined the term “Click Chemistry” in 2001 to refer to prospective chemistry that would allow for the production of complex molecular scaffolds from a concise and general reaction scheme with high yield. Like the buckle and latch of a seatbelt clicking together, simply, Sharpless had sought an analogous chemical buckle and latch that could be appended to structures and allow for the rapid coupling of different substrates containing these complementary handles. Ideal click reactions would operate under simple reaction setups, be unaffected by exposure to oxygen and water, and occur quickly with easily removed and inoffensive byproducts; in principle, even scientists not trained in synthetic chemistry could run the reaction (The Nobel Prize in Chemistry 2022 2022).

The concept was akin to an adhesive panacea: what would have taken experienced synthetic chemists several steps with harsh and specific reaction conditions to achieve could now be achieved quickly and with most substrates of interest. The crux of the problem was in finding chemical handles that coupled selectively without reacting with other structural components (The Nobel Prize in
Chemistry 2022 2022).

Later that year, Meldal and Sharpless both independently discovered that the copper-catalyzed azide-alkyne cycloaddition (CuAAAC) was a potent click reaction. In essence, substrates possessing an azide—three nitrogens linearly bonded together—can be linked to substrates possessing a terminal alkyne—a carbon-carbon triple bond terminating a carbon chain—in the presence of small quantities of copper metal. Importantly, these handles can be quickly installed onto substrates that were to be coupled. The reaction fulfills the requirements of a general diversification method established by Sharpless previously: the reaction is high-yielding and selective under ambient temperatures, occurrs without generation of side products, and progresses in an aqueous environment (The Nobel Prize in Chemistry 2022 2022). 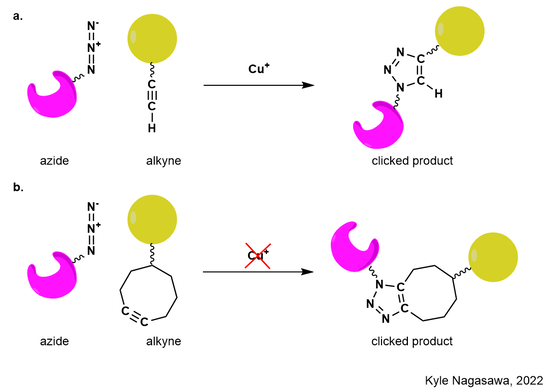 Figure 1. Molecular building blocks containing the azide and alkyne can be covalently linked together through the formation of a highly-stable nitrogen-containing heterocycle called a triazole. (a) Sharpless and Meldal discovered usage of the copper-catalyzed azide-alkyne cycloaddition as a reaction for click chemistry. (b) Bertozzi sought to use click chemistry within biological systems and applied the copper-catalyzed azide-alkyne cycloaddition to occur with a highly-strained carbon-carbon ring bearing an alkyne in the absence of copper.

The CuAAAC click reaction has been utilized by many researchers to foster the development of novel therapeutics for the treatment of illnesses. For instance, the prospect of using synthetic DNA and RNA to disrupt gene expression is a popular area of interest in gene therapy. The difficulty of this approach results from the inefficient intracellular uptake of nonmodified oligonucleotides–short strands of DNA or RNA–as well as the in vivo enzymatic degradation and relative instability of RNA once inside target cells. Several researchers have conjugated alkyne-carrying SiRNA to cargo substrates designed to bear an azide, such as lipid nanoparticles and peptides, finding that these coupled products allow for cellular intake of therapeutic oligonucleotides. Once within the cell, SiRNA would inhibit the expression of specific genes implicated in illnesses and diseases (Astakhova et al., 2018).

Similarly, click chemistry has allowed for the rapid generation of therapeutic drugs known as conjugated inhibitors. Chao Wang and his coworkers found that the antiviral natural product sapogenin individually showed poor potency against HIV-1, the most common Human Immunodeficiency Virus. However, conjugating sapogenin and Enfuvirtide–a peptide on market used to treat HIV–together generated a therapeutic hybrid with an enhanced effect against both Enfuvirtide-sensitive and Enfuvirtide-resistant HIV-1 strains (Wang et al., 2014). Click chemistry has also been used in the growing field of proteolysis targeting chimeras (PROTACs) to link ligase-ligand motifs to induce in vivo protein-specific degradation. Furthermore, click chemistry has been employed towards the development of combinatorially generated drug screening libraries. In the latter example, diverse potential drug candidates can be produced through the combinatorial clicking of different modular scaffold building blocks to quickly produce molecular scaffolds to screen against drug targets.

Notably, the azide-alkyne cycloaddition could theoretically occur in biological systems without interference to allow for in vivo click reactions, given the rarity of alkynes and azides in natural products and their relative inertness with enzymes in physiological conditions. This technology could allow for the conjugation of biomolecules–modified to carry an azide or alkyne–to functional substrates for characterization in living systems. In response to copper’s cytotoxicity, Bertozzi’s 2008 work tuned the CuAAAC to proceed with high fidelity in biological systems. Instead of using copper as an additive fostering the cycloaddition, she modified the alkyne to be employed as an intrinsically compressed cyclic structure spring-loaded to react readily with azides even in the absence of a
metal catalyst.

In her nobel-prize winning work complementing the CuAAAC work of Meldal and Sharpless, Bertozzi provided the first set of evidence of the practical bioorthogonality—the ability to occur within living cells without interfering with biochemical processes—of the azide alkyne cycloaddition. She cultured live Chinese hamster ovary (CHO) cells with azide-labeled glycans, and subsequently exposed these cells to minute quantities of BARAC-Fluor, a cyclooctyne baring fluorescent probe. Bertozzi reported the fluorescent labeling of CHO cells that incorporated the azide-labeled glycan onto their cell surfaces with high image contrast. What would otherwise require a potentially invasive washing process to remove high concentrations of weakly bound fluorescent probes, using labeling methods predating the click reaction, was made accessible by the bioorthogonal and robust nature of the click reaction (Jewett et al., 2010).

As evidence of the practicality of the bioorthogonal click reaction, Bertozzi later fed zebrafish sugars bound to an alkyne motif in hopes of tracking glycans present on cellular surfaces. Similar to her CHO cell labeling experiments, after these sugars were incorporated on cellular surfaces, zebrafish cells were treated with a clickable fluorescent tag (Agarwal et al., 2015). Using the click conjugation reaction, she examined the distribution of fluorescent-active glycans across the body. Bertozzi discovered that certain glycans allow tumor cells to evade the body’s immune system, and she subsequently developed a glycan-specific antibody linked to an enzyme to catabolize tumor cell surface glycans as a potential therapeutic of advanced cancers (The Nobel Prize in Chemistry 2022 2022). 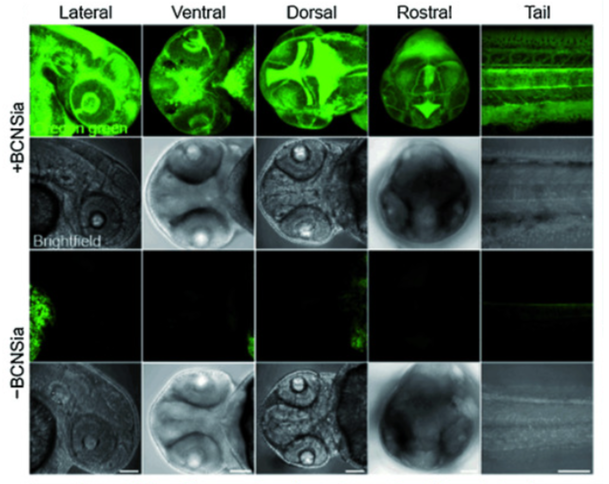 ​Following the work of Bertozzi, countless researchers have used click chemistry to link together fluorophores and other reporter molecules to specific biomolecules, ranging from nucleic acid structures to peptides. In doing so, researchers from a diverse range of specialities could identify and characterize biomolecules and their related biological processes. From allowing for the study of virus distribution during infection or even discovering the underlying metabolic network related to a specific biogenic small molecule implicated in disease, the technology afforded with this year's Nobel Prize allows for the versatile deconvolution of otherwise difficult to characterize systems (Ouyang et al., 2018; Hoki et al., 2020). The CuAAAC may appear to be a universal solution to the dilemma of rapidly building molecular complexity, but in reality, it is a specific solution–containing its own set of nuances and drawbacks–with a wide range of applications. Even with the seemingly universal azide-alkyne cycloaddition fostering numerous recent medicinal advancements, it is limited to the reactivity of the azides, which tend to react poorly if physically occluded, or alkynes, which tend to react with themselves. In carrying out the reaction, chemists are limited to the development of a triazole moiety–in other words, all clicked products would bear a specific ring motif. Ultimately, it may appear attractive to have a glue that works universally for all common household substances, yet in heralding such an ideality, it is foolhardy to overlook the nuance and intricacies of each glue type. Chemists are continually producing new click reactions, each with two unique pairs of chemical motifs as well as their own nuances and specificities. Newly developed click reactions allow for further diversification and expansion of the scope of clickable partners not permitted with the azide-alkyne cycloaddition. As the gamut of orthogonal reactions–each reaction as a specific solution to the dilemma of a molecular glue panacea–continues to grow, so do the advancements in medicine.