Suchita Kumar, Class of 2021
Notch signaling is an evolutionarily-conserved signaling mechanism involved in several stages of development. Although the core signaling pathway has a simple molecular design, Notch signaling is responsible for several distinct cell-fate decisions including proliferation, differentiation, border formation, and apoptosis. Since cell-fate decisions are critical to embryonic development and postnatal tissue regeneration, misregulation or loss-of-function mutations in genes related to Notch signaling can lead to diseases in various tissues and organs (Andersson, 2011). In humans, mutations in the Notch signaling pathway have been found to cause Alagille syndrome, Spondylocostal dysostosis, and Hajdu-Cheney syndrome (Harper, 2003).

Notch signaling can be traced back to the emergence of metazoa, which is the monophyletic group of multicellular organisms thought to have evolved 1,300-600 million years ago during the pre-Ediacaran period (Muller, 2003). The development of multicellularity required the simultaneous development of intercellular communication. With further evolution of eumetazoa, which includes the cnidaria and bilateria with differentiated tissues, there was a need for more complex intercellular signaling to coordinate the development of distinct tissues and organs (Dewel, 2000). In order to establish body axes and choreograph morphogenesis during development, metazoans rely on only seven core signaling pathways, one of which is Notch (Gazave, 2009). 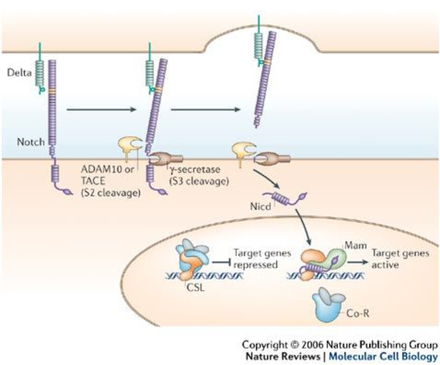 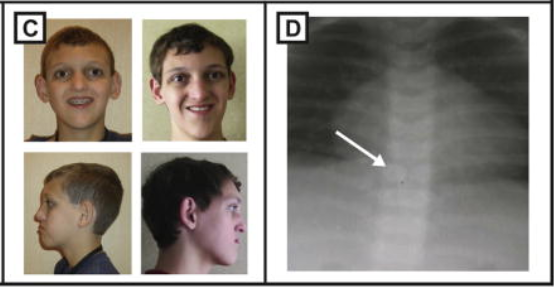 Figure 2
Alagille syndrome (ALGS) is characterized by liver disease, cardiac disease, skeletal anomalies, and renal anomalies. Liver disease resulting from intrahepatic bile duct paucity is the most common phenotype of ALGS, which occurs due to the role of Notch signaling in bile duct formation. Cardiac disease is also observed in ALGS in the form of vascular stenosis (narrowing of arteries and veins) and defects in the atrioventricular septum that divides the left and right chambers of the heart. ALGS also causes skeletal anomalies like butterfly vertebrae as seen in Figure 2, resulting from the vertebral arches failing to fuse, and renal anomalies due to the role of Notch signaling in nephron segmentation (Harper, 2003). These phenotypic aberrations further make evident the importance of Notch signaling in binary cell-fate decisions involving segmentation, fusion and other morphogenesis. 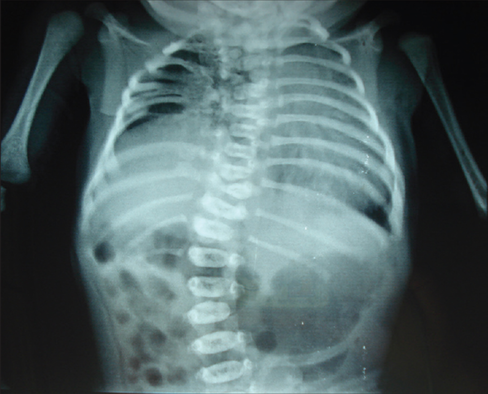 Figure 3
Spondylocostal dysostosis (SCD) and Spondylothoracic dysostosis (STD) are diseases that fall under the category of abnormal vertebral segmentation (AVS), which are characterized by congenital malformations in which vertebrae are fused or altered in shape, position, or size. The cause of these diseases is a mutation in the Delta-like ligand 3 (DLL3), which does not bind to the Notch receptor, but inhibits Notch receptor activity by targeting it for lysosomal degradation. Mutation of DLL3 causes an increase in Notch signaling, preventing proper somitogenesis, which is the formation of the vertebral column, rib cage, skeletal muscle, cartilage, and tendons (Harper, 2003). This leads to the misalignment and fusion of vertebrae and ribs as seen in Figure 3 above.

Hajdu-Cheney syndrome (HCS) is a rare condition characterized by osteoporosis and craniofacial abnormalities. It is the result of mutation of the NOTCH2 receptor, which leads to a positive feedback loop that increases its own signaling. This increase in Notch signaling prevents proper bone formation and metabolism (Harper, 2003). Since HCS commonly presents with a cleft palate, this further emphasises the role played by Notch signaling in establishing bilateral symmetry.